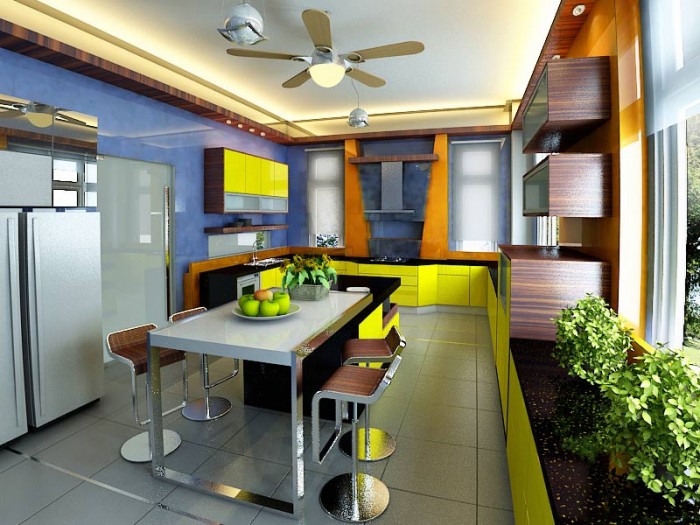 Once merely a functional space, the role of the kitchen in the modern home has now been totally transformed. No longer merely a work space where domestic chores are endured, the modern kitchen is the hub of family life, a living space and the focal point of the home. No surprise then that a good kitchen tops most property buyers’ wish lists and can be the feature which sells a house on its own.

Aesthetics to the Fore
As the kitchen has become a more treasured room in the home so has more attention been lavished on its features and design. As a purely functional space the room was not worthy of much creative input but as the hub of domestic life it is a room which deserves attention to detail. Aesthetics have come to the fore and often more thought and attention is now lavished on the appearance of the kitchen than any other room in the house.

The Layout
In terms of both making the best use of available space and presenting the kitchen in the most favorable light it is well worth spending time and effort to develop the best layout. The right balance between functionality and feel must be struck with the inclusion of the storage space and appliances required whilst not cluttering the space. Once the layout has been established it is time to get creative because the choice of style and color will give the kitchen its character and determine its impact and feel.

White Goods
Both householders and interior designers are becoming bolder with the use of color in the kitchen. Units are installed in a range of hues and finishes and even appliances can add color to the space. There was a time when a fridge was always white but now what were referred to as white goods can be any color of the rainbow. It became fashionable to conceal appliances by making them integral to the units but now they are statement pieces to be proudly displayed.

Individual Style
Gone are the days when one kitchen looked much like another. Wood finishes and white units are being replaced by bold reds, bright blues, pastels and black. The kitchen can be anything from a riot in red to the ice cream tones of the 50’s diner. Striking colors are appearing on walls and the kitchen is being transformed into a space for self-expression and creativity in design.

Accessorize
Kitchens are certainly now exciting spaces but they can be costly and too much self-expression could lead to a room which does not appeal to future buyers. If you want to exercise your creativity in the kitchen without breaking the bank and scaring off the buyers then do it with accessories. The addition of bold accessories and homewards is a quick, easy and cost effective way of brightening and personalizing the room whilst leaving a neutral canvas for future owners to develop for themselves. Choose your theme and then add kettles, peddle bins, chairs and even pots and pans in striking shades to add character and style to the space.

The kitchen has a crucial role in modern lives and its importance is being reflected in a greater attention to style. Times have changed and with a vast array of colorful units, appliances and accessories now available, a colorful kitchen is no longer merely a matter of the paint on the walls.

Sally Stacey is a keen writer and business owner who divides her time between writing and running her shop.

Design Ideas for to Maximize Those Small Bathroom Spaces

An introduction to Acoustic Ceilings